These puff pastry cinnamon rolls are quite possibly the speediest cinnamon bun recipe you will see! With this simple recipe and only six ingredients, you will be able to bake dreamy cinnamon rolls with little time or fuss!

If you like sweet pastries, check out my Strawberry Cheesecake Vatrushka Buns.

Do your cravings come fast and urgent? It seems to happen to me especially often when I am tired, at which point a simple, speedy baking recipe can be a life saver!

I don’t know what it is about cinnamon in baked goods that makes them absolutely irresistible to me. Just the aroma of it wafting through the house drives me mad! Bonus- your house will smell divine for hours.

Simple baking recipes that use convenient shortcuts like this one can be amazing ways to get children into baking. Since the recipe mostly involves assembly, there is plenty of opportunities to get them involved in a treat they are sure to enjoy!

Have I convinced you already? I will stop chatting then and get right down to business.

Different… but just as delicious. They satisfy the fiercest of cravings!

Pre-made puff pastry can be a bakers best friend. While it is perfectly possible to make your own, it is labour intensive and takes time.

I’ve drizzled mine with some caramel sauce, which made them extra indulgent. You can use your favourite caramel or fudge sauce, your own recipe or a store bought like I did.

You can also use a traditional sugar glaze that I used in my other sweet roll recipe. But if you prefer to leave them without any icing, they are perfectly delicious on their own!

Start by preheating your oven to 400F/200C. Roll out your puff pastry on a floured surface into a ¼″ thick rectangle. It is so much easier if you use pre-rolled pastry!

Now brush with 2 tablespoons of melted butter and sprinkle with brown sugar, cinnamon and mixed spice.

Then roll the pastry from the narrow side. It’s hard to roll up the pastry very neatly, but this doesn’t matter much.

Use a knife to cut into 12 equal parts. To make them even, first cut the roll in half, then in quarters and so on until your get 12 even chunks.

Then arrange on a buttered dish leaving ½″space between each bun (more than you see in the picture as I re-arranged mine later). They will need room for expansion as they bake, similar to adding cookie dough onto a baking tray. A sheet of parchment paper can also be used instead of a layer of butter.

Place it all in the fridge to chill for 20 minutes. Chilling before baking allows the buttery layers to melt more slowly and the cinnamon rolls to hold their shape. It also results in flakier layers as they remain separate.

Then take out of the fridge and bake in the preheated oven for 20-25 minutes until golden. Enjoy them as they are or add the topping of your choice!

As any baked goods these puff pastry cinnamon rolls are at their best straight out of the oven! 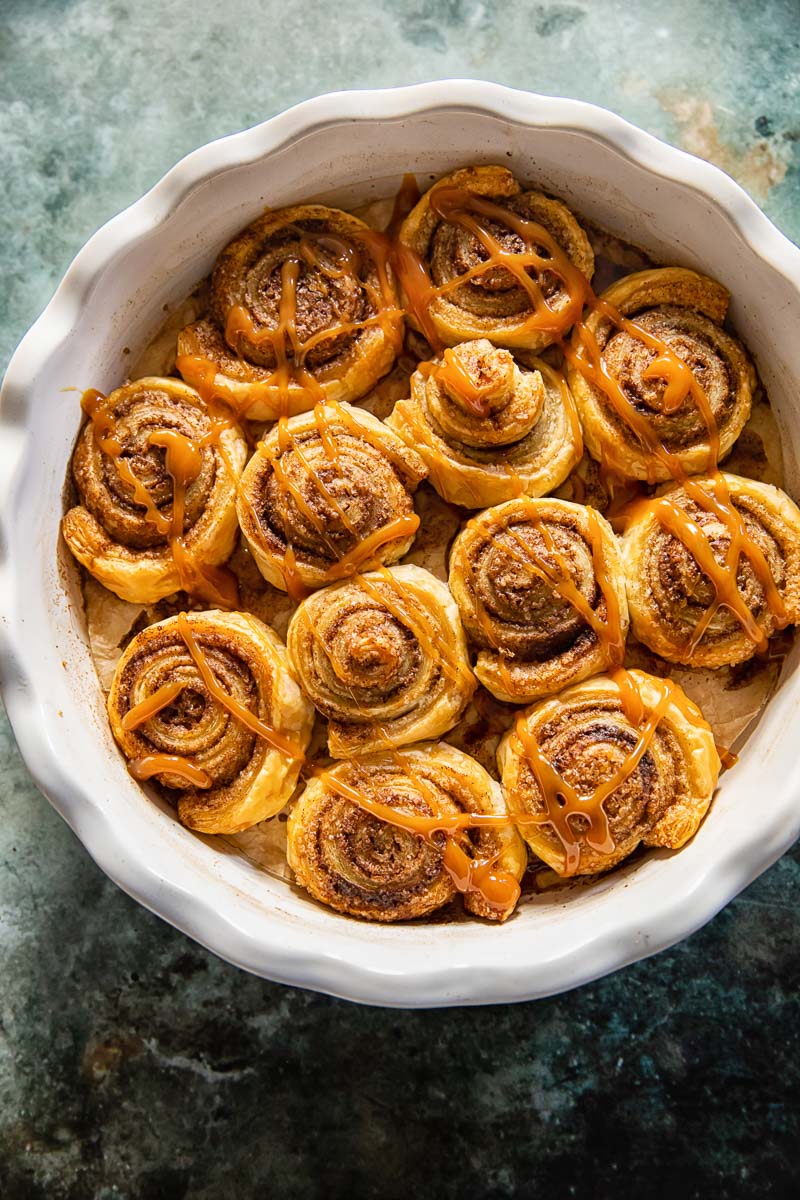