These European style cinnamon buns will become the hit of every gathering and give you the reason to wake up in the morning! Watch my video tutorial on how to shape them into gorgeous sugary knots.

For another delicious sweet roll recipe, take a look at Chocolate Almond Rolls. Or use the same dough recipe and make Hamburger Buns! 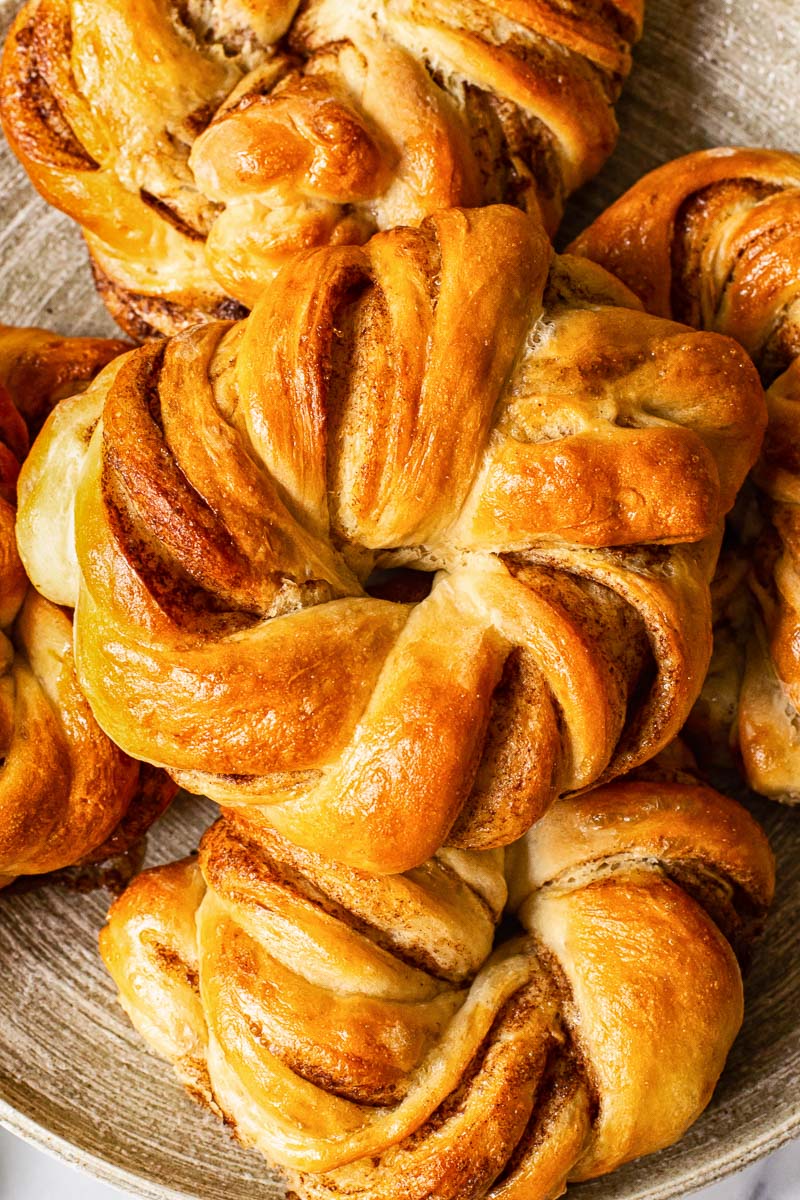 The recipe for these cinnamon knots comes straight from my mother, and I am thrilled I finally get to share it with you. You see my mom is known for her cinnamon buns or plushki as they are called in Russian.

Her buns are so good she uses them as currency. She tops up her payment with “plushki” when a builder is doing work on her flat, entices a nephew to fix her computer with promises of sweet buns.

And no birthday celebration goes without them! Her famous cinnamon buns are her secret weapon and she knows it full well. 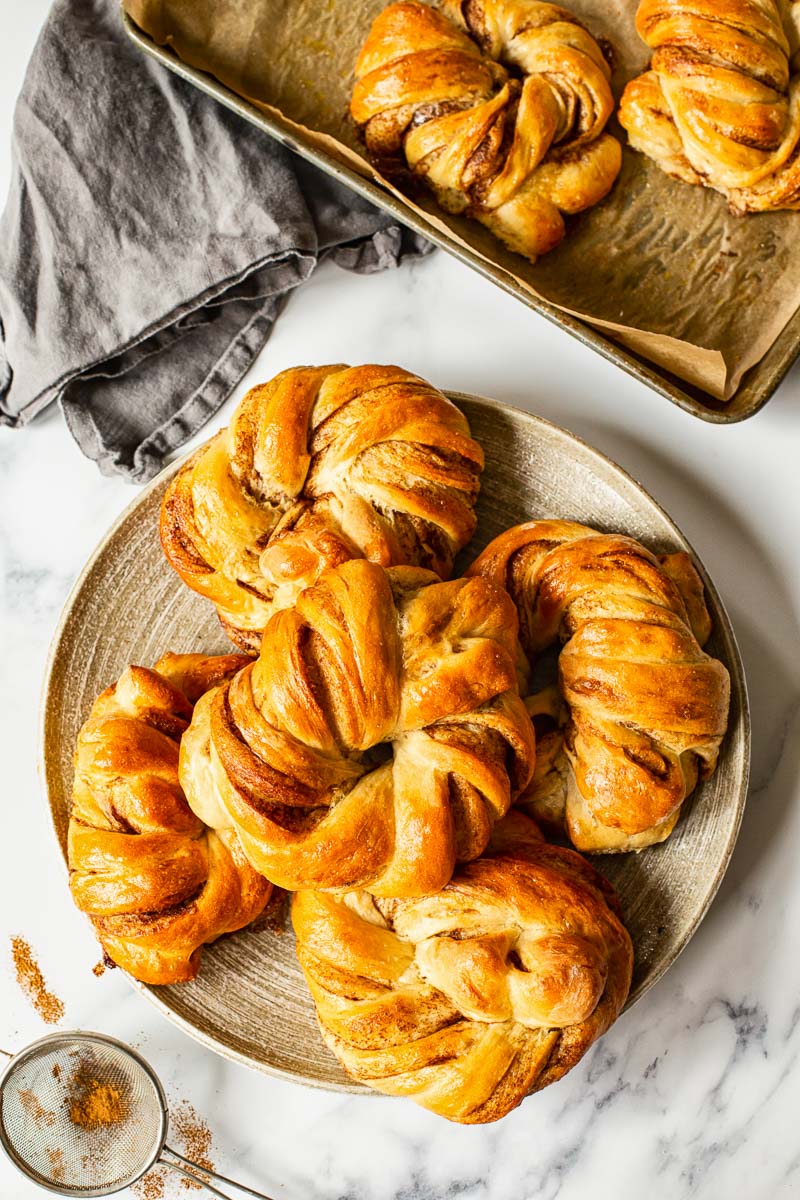 I’ve wanted her incredible recipe for years but as with every Russian mom, her recipe is not a detailed written one. She makes her stellar cinnamon rolls by eye!

So after she finally shared it with me in very loose terms I had to do several tests to nail down the exact measurements and baking time. I also made a video, so you could see how I roll them because a picture or in this case a video is worth a thousand words! 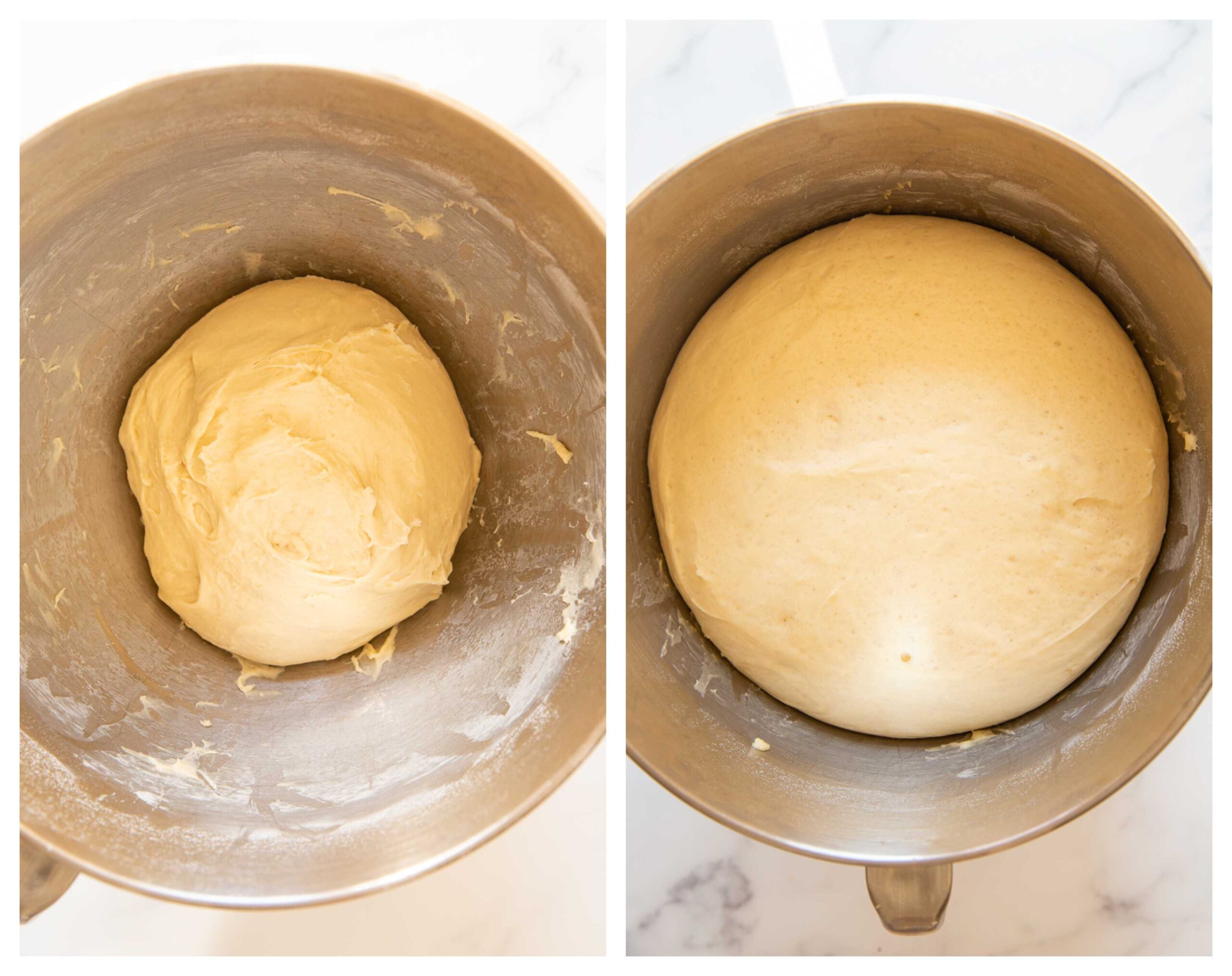 How to make them from scratch

I won’t beat around the bush and tell you the main secret straight away why these cinnamon buns are so fluffy. The yeast. My mother’s recipe calls for a lot of yeast. That makes them rise very quickly and expand in the oven to incredible heights.

She also uses fresh yeast instead of the more common dry variety sold in supermarkets. Fear not, I’ve adapted her recipe to suit our needs using dry active yeast. 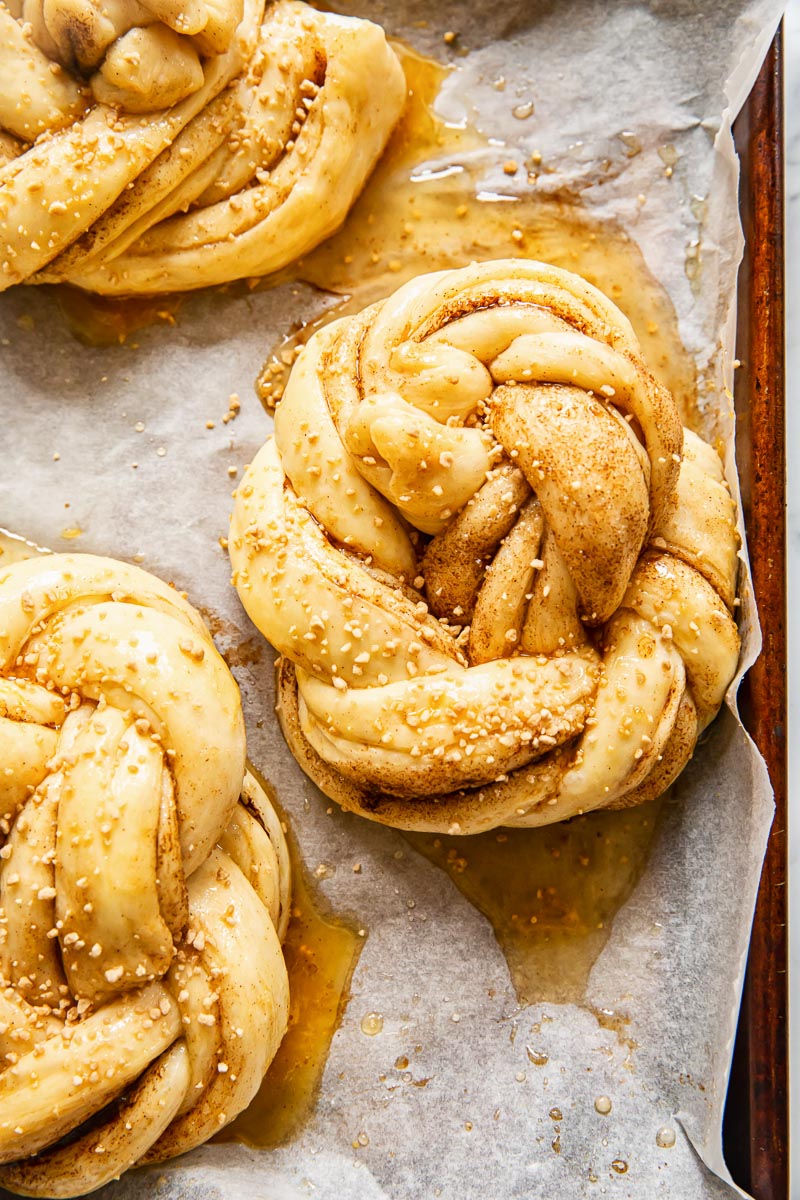 What makes them so soft and buttery is the eggs, milk and vegetable oil in the dough. Other than that the recipe is very straightforward. Just mix all ingredients in a bowl, knead briefly until you get a soft and elastic dough.

Let it rise for 45 minutes to 1 hour in a warm spot in your house until the dough more than doubles in bulk. Then shape, another shorter rise, bake! 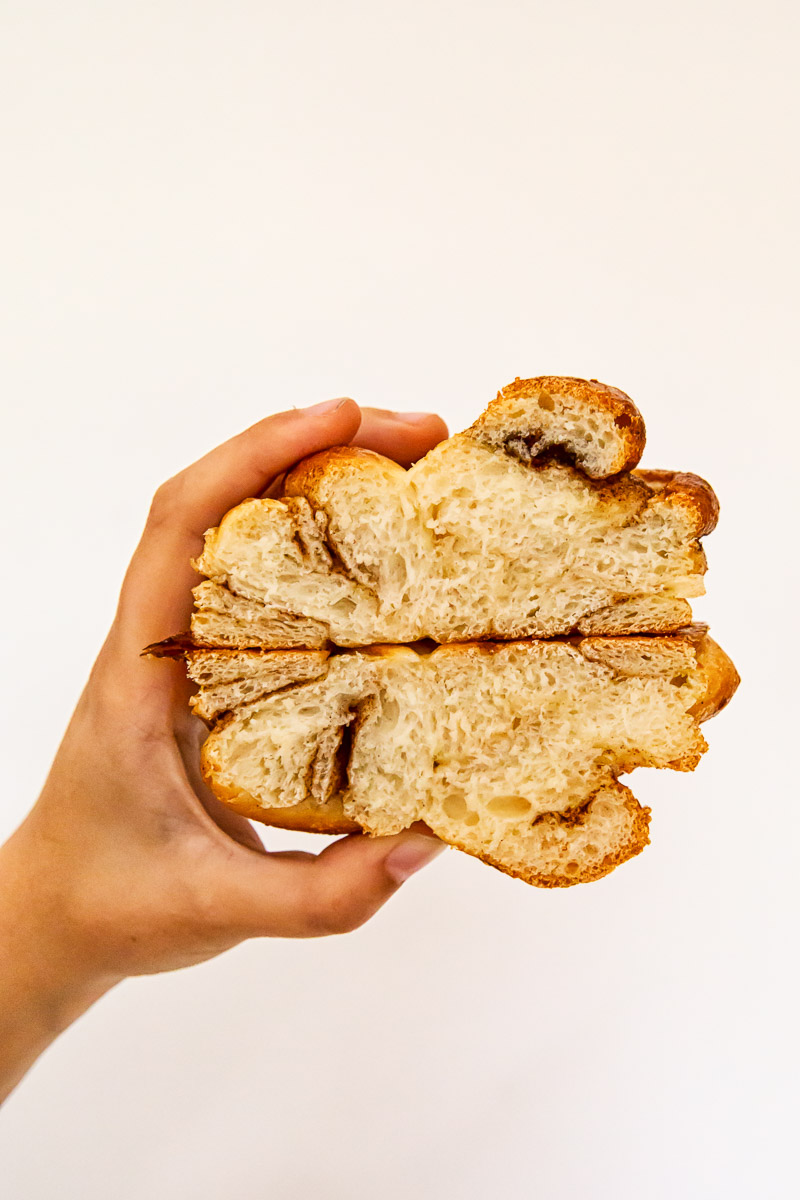 If you are looking at these buns and thinking right now that they look too intimidating, and are surely difficult to make, I want to stop you right there.

They are NOT difficult to make! The trickiest part of this recipe is actually shaping them to make them look like they came straight from a bakery. And that is why I made a video for you.

The truth is they are also very easy to roll and shape. You just need to see how it’s done! 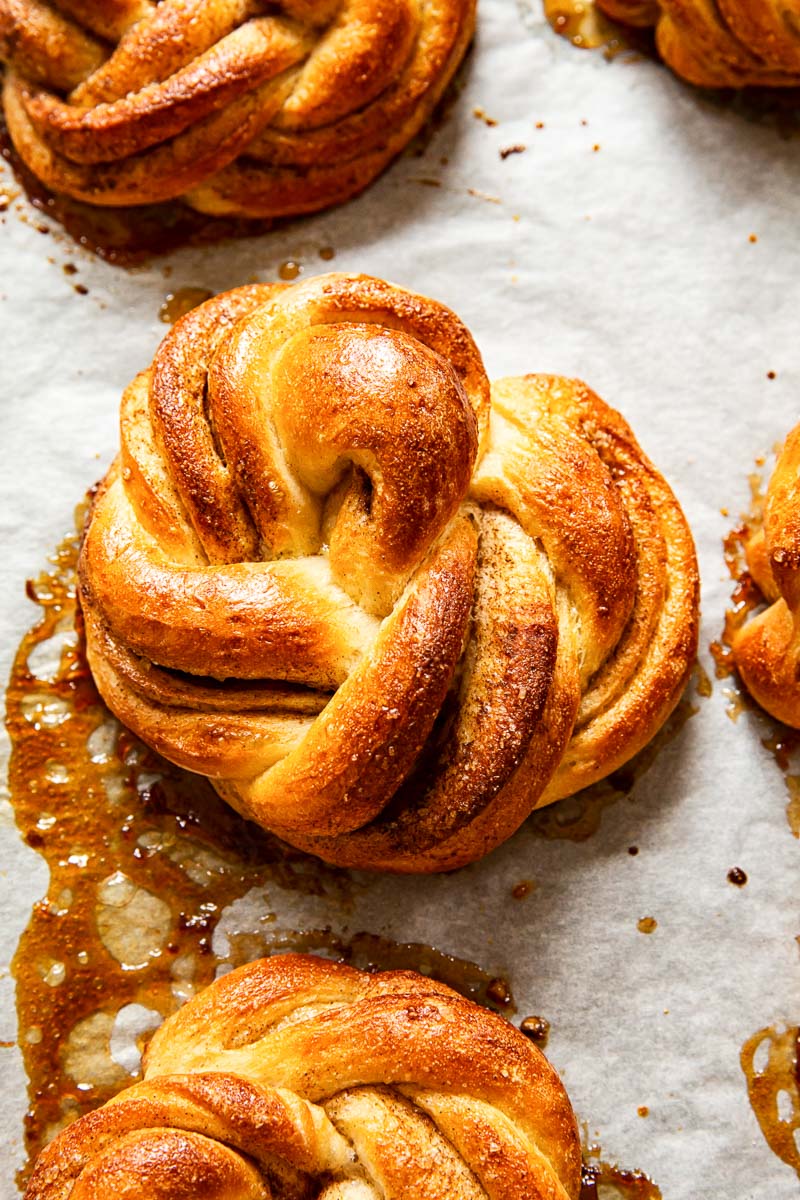 How to shape cinnamon buns

Shaping a simple piece of dough into something beautiful is my favourite part of cinnamon bun making. There are so many ways of doing that and different countries have their signature shapes. My mom makes hers into roses, which is very pretty and traditional.

I decided to do something slightly different. So I cut my dough into strips, twisted them, then tied them into knots. The gif below demonstrates it pretty well!

You can use this recipe to make traditional cinnamon rolls. They turn out incredibly fluffy when baked together in a rectangular 9X13 inch pan.

You will get two of those out of the recipe. My kids absolutely adore that type. Whichever way you decide to shape your cinnamon buns, make sure you brush them with egg wash for that golden look! 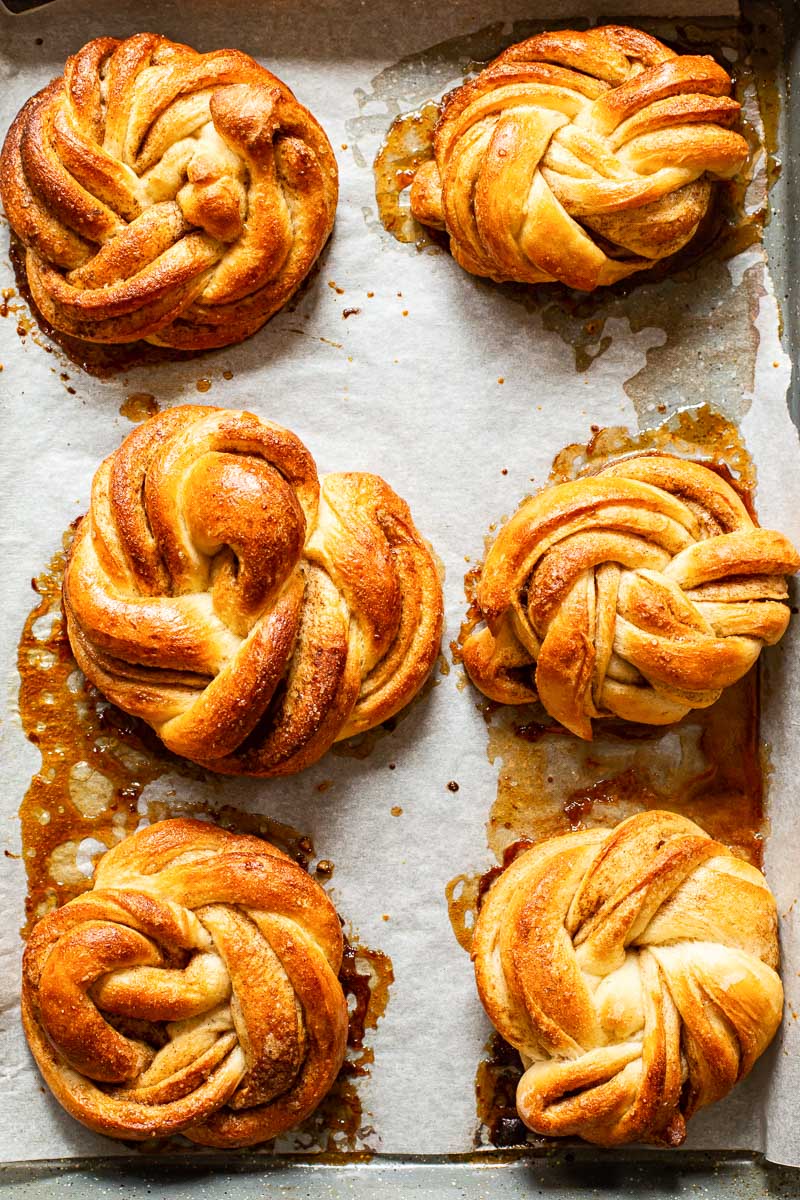 How to make a cinnamon bun filling

The filling is nothing more but a combination of butter, sugar and cinnamon. I’ve changed my mother’s recipe a tiny bit as she uses oil instead of butter. I wanted to use butter for more flavour.

Butter also helps to keep the strips of dough together when you are shaping them into buns while oil makes it more difficult to work with.

If you get tired of cinnamon buns, you can fill your dough with a combination of sugar and poppy seeds, which is very traditional for Russia. Or use Nutella! 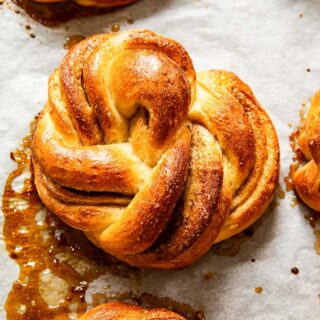 You can use all purpose flour if bread flour is not available.