Try my Spanish Chicken recipe and add a touch of Mediterranean flare to your dinners! Spanish paprika flavoured chicken thighs are braised in a rich and tangy tomato sauce along with white beans and olives. Serve with rice and a simple salad.

Or take a look at another reader favourite with similar flavours. Spanish Baked Chicken Thighs and Potatoes is a recipe that delivers the taste of Spain in a convenient one pan meal. 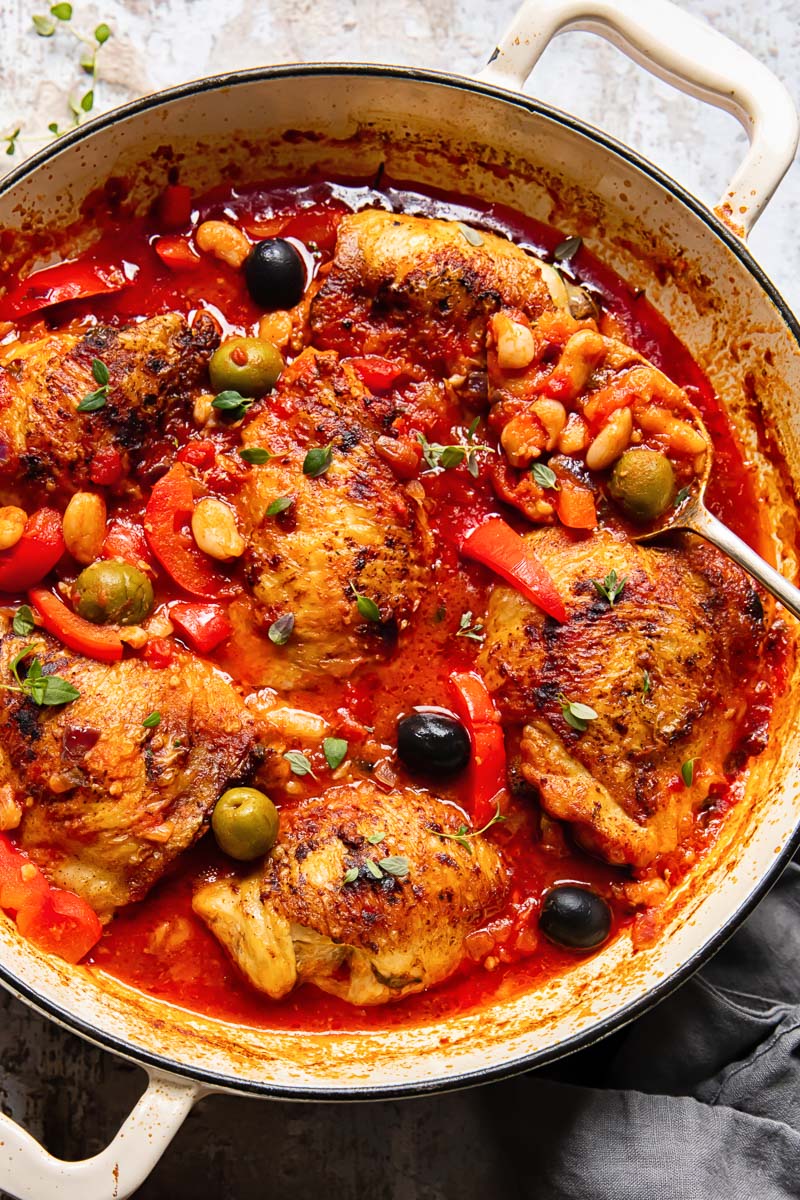 Spain is the country that will always be the place I think of whenever I am in need of sunshine and happiness. Some of our most memorable family holidays were spent there.

We also love the food so much that we try to incorporate the Spanish flavours into our weekly dinners back home. This recipe for chicken thighs, braised in a rich tomato sauce with white beans and olives, is the one inspired by our favourite holiday destination. 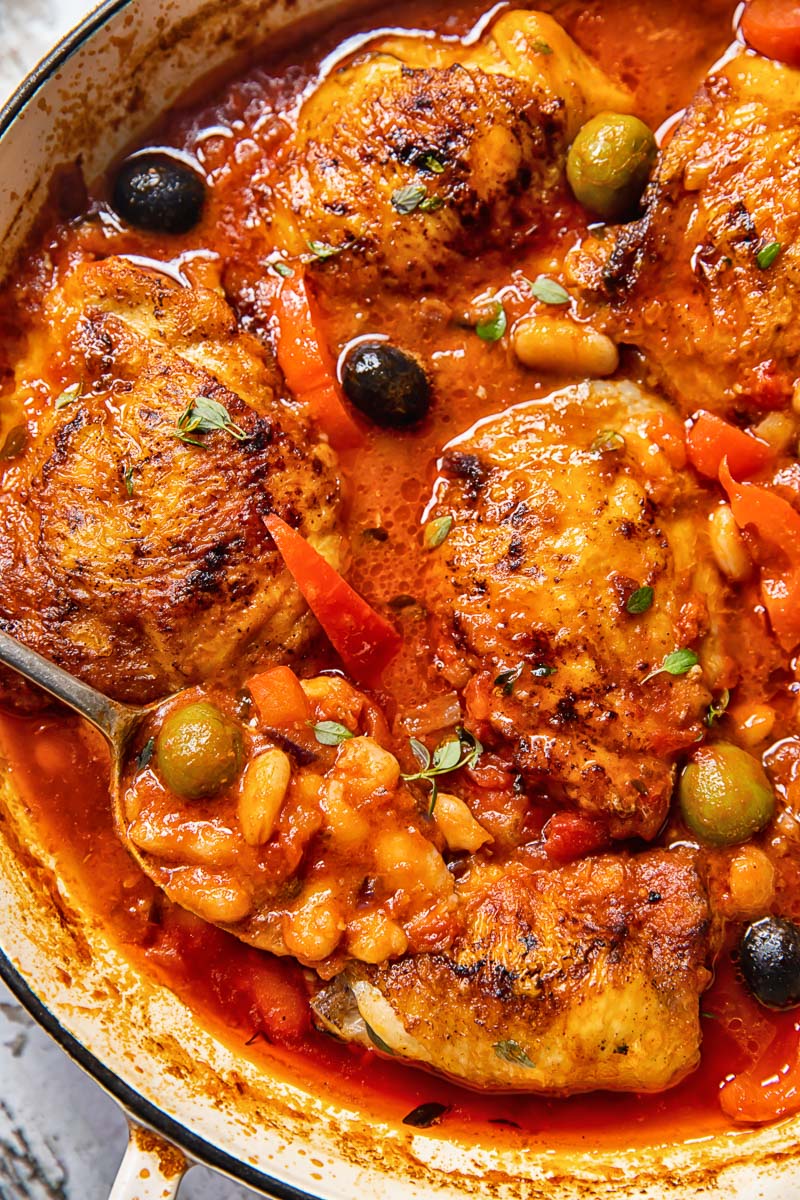 This recipe is not an authentic recipe. I should really call it Spanish-style chicken. But it does incorporate tons of gorgeous ingredients used in Spain. Do they ever come together in a recipe like this? I have no idea as it is my own creation.

The chicken thighs are rubbed with salt and smoky Spanish paprika, then browned for a crispy exterior.

As soon as the chicken is browned, we make the tomato sauce. Then I mix in green and black olives, which add a delicious briny flavour to the sauce. I also like to add beans to my braises. They add more substance and fibre to the meals. Beans are also a very authentic and frequent ingredient in the Spanish cuisine.

For the final step, the chicken thighs are braised in the sauce in the oven until they are crispy on the outside and melt-in-your-mouth tender on the inside.

Now let’s talk about the sauce, which is the real deal. And it comes from an iconic Spanish recipe called Patatas Bravas. 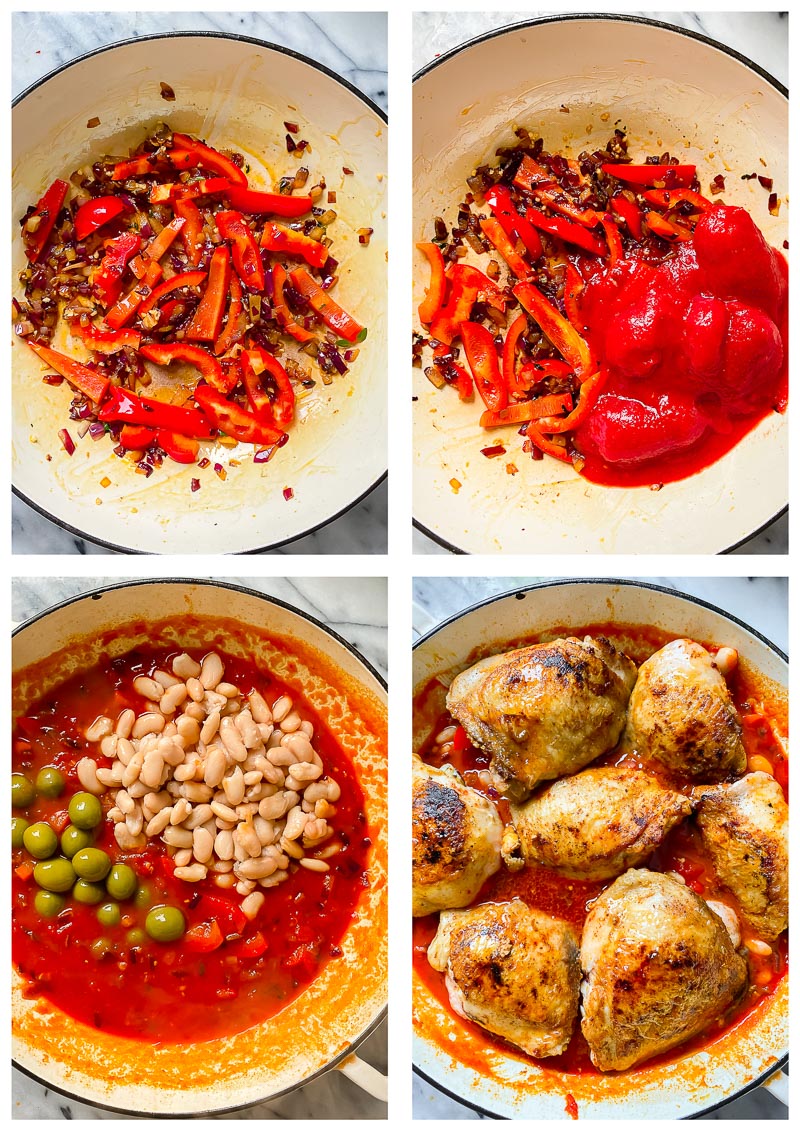 Bravas in Spanish means “fierce”, which will immediately give you an idea of the nature of this sauce. Nothing shy or understated. At first glance Bravas sauce will remind you of its Italian cousin, the Marinara sauce as it’s called North America.

Although they are both tomato based, they are nothing alike. I am utterly in love with the bravas’ tangy, salty, sweet and spicy taste.

Patatas Bravas is a tapa, that accompany drinks in Spain. Essentially, they are deep fried potatoes, which are served drizzled with the sauce. Sometimes garlic aioli is added as well. 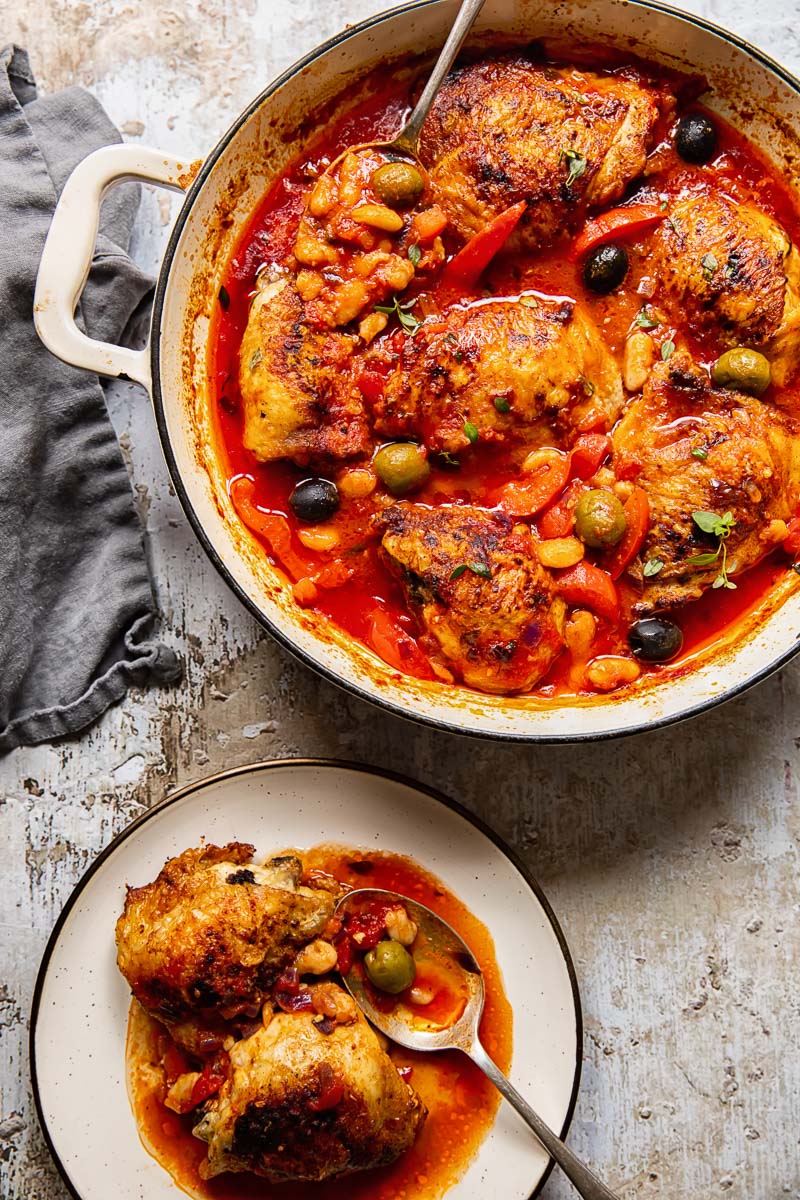 The sauce is so delicious, it’s a shame to only use it with potatoes. I decided to pair it with everyone’s favourite meat chicken. Braising chicken thighs in this tangy tomato sauce produces magical results.

Chicken with crispy skin and tender flesh, that is falling of the bones. The sauce, mixed with olives and white beans, is deeply savoury and incredibly satisfying.

This delicious chicken recipe is a cross between a braise and a stew, and it’s so much better for it!

For the bravas sauce