This Frostbitten raspberry cake is the cake for any celebration in any season! Three layers of vanilla sponge filled with raspberry compote and mascarpone frosting, covered in a creamy white chocolate frosting.

I love all cakes I bake but some make the effort more worthwhile than others. This raspberry cake is off the scale magnificent!

I can’t even begin to describe the greatness of vanilla sponge cake filled with mascarpone and raspberry compote and frosted with white chocolate buttercream. It’s glorious.

After I took the first bite I was not at all resentful that I’d spent a good portion of Christmas Eve fussing in the kitchen. If this is what it takes for an amazing birthday cake then it is worth it!

To me a perfect cake should have at least two layers of moist sponge, a lovely compote and a luxuriously creamy icing that isn’t sickly sweet. Having these elements in perfect balance is the secret to a memorable cake.

But it also has to look the part. It should not look out of place on a festive table, with all the right colours and decorations. Personally, I think a white cake with raspberries and rosemary absolutely looks the part!

What is Frostbitten Raspberry Cake?

In coming up with this cake I had to draw on my Russian roots. The cake I made was reminiscent of the ones I ate as a child, baked by my dad.

The recipe for this raspberry cake is a mix of things: the sponge is Russian “biskvit”- my dad’s recipe, the raspberry mascarpone filling was inspired by Sweetapolita.

For a bit of help in making the sponge, check out this video for White Christmas Truffle Cake. The sponge is the same and following the same method will help you achieve great results!

And finally the white chocolate buttercream frosting was my own invention, made to taste very similar to my dad’s frosting. It’s lovely and creamy without overwhelming with too much sweetness.

Because this was made for Christmas, I chose toppings that gave it a holiday look. Rosy red raspberries and a green sprig of rosemary land perfectly on the snowy white frosting. A dusting of icing sugar adds to the effect.

It all looks so wintery! But this cake isn’t only for Christmas. It’s also perfect for New Years and, with a different mix of toppings, could be used at other times of the year as well! 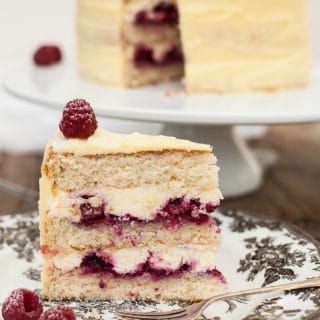 For the Syrup (for soaking the sponge layers)

For the Mascarpone Cream

For the Raspberry Compote

For the White Chocolate Buttercream

For the Mascarpone Cream

How to assemble the cake

For the White Chocolate Buttercream

Keyword layer cake, raspberry cake
Tried this recipe?Let us know how it was!