These stuffed bell peppers are a tried and true recipe from my mother and grandmother. Stuffed with a mixture of ground beef and pork as well as rice, caramelised onions and parsley this recipe make you feel all warm and cosy on the inside!

If you like stuffed peppers, I am sure you will enjoy my Cabbage Rolls as well! 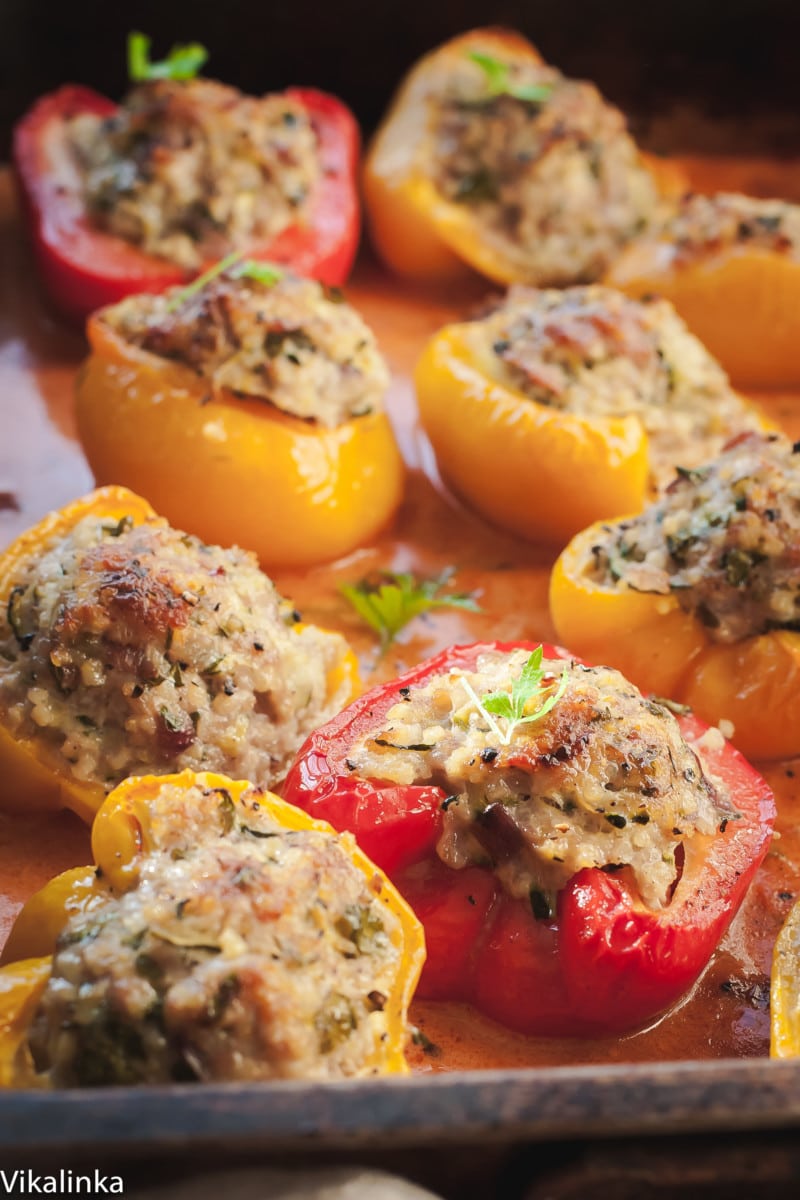 This recipe was on my waiting list far too long. As soon as I began blogging I knew I would have to write about stuffed bell peppers that my mom used to make.

It’s an authentic Russian recipe, which means the peppers are stuffed with meat. Yes, we Russians are very much a meat loving nation. 🙂

However, our vegetable dishes are bountiful and ridiculously full of flavour. No one would ever imagine to sit down to just a plate of steak. It’s all about variety and moderation.

These peppers are loved by anyone who eats them. The meat filling is mixed with rice and flavoured with  caramelised onions, herbs and spices in perfect harmony. 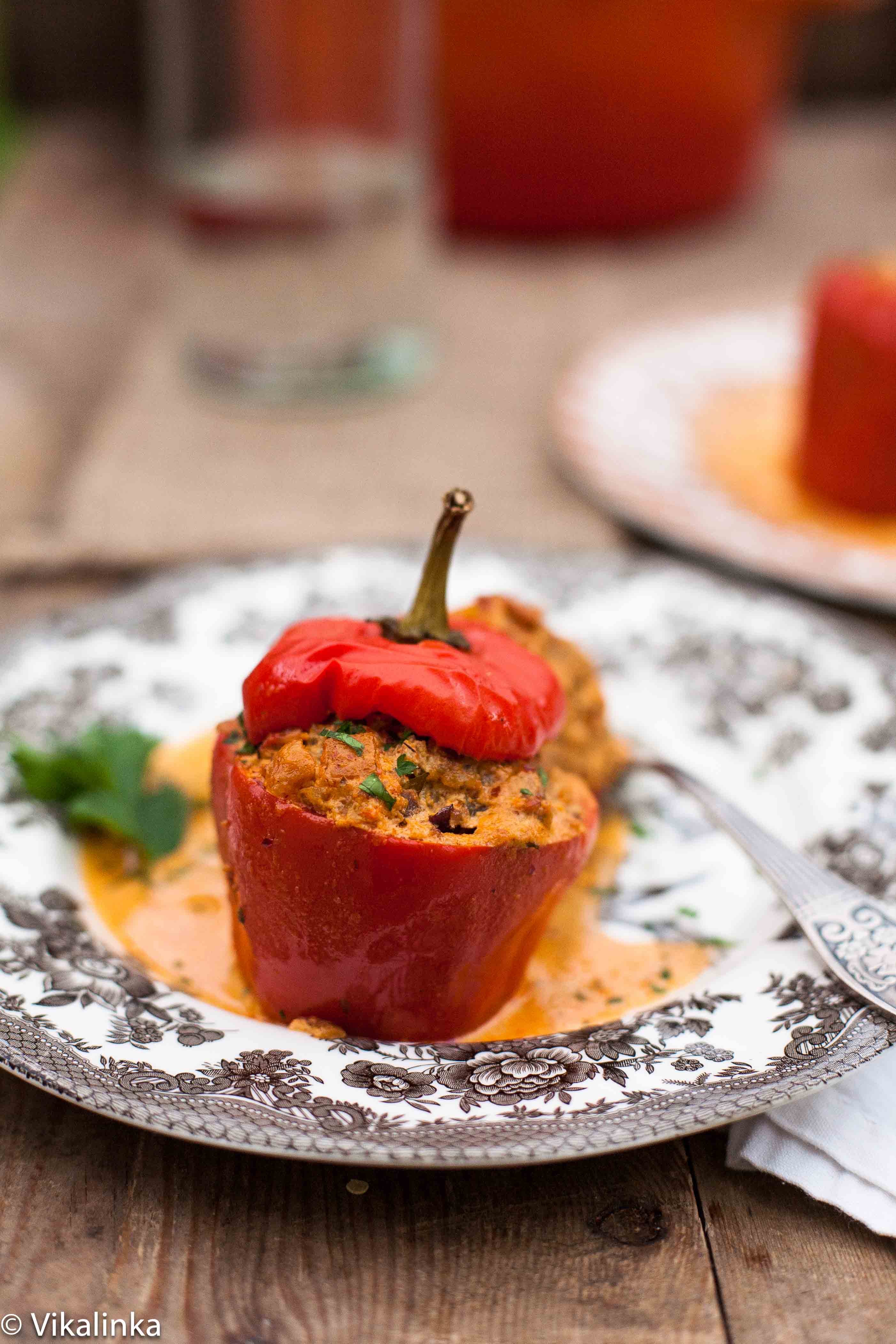 How to make Russian stuffed peppers

The best way to cook stuffed peppers is in an oven slowly, covered in a delicious tomato and sour cream sauce. This way the peppers and the filling absorb the sauce making them juicy and full of flavour.

You can play around with the filling like I did in this recipe for lighter stuffed peppers but the traditional filling is a mixture of ground beef and pork plus cooked rice.

You can cook rice specifically for this recipe or use leftover rice. If I am cooking ½ cup/50g of rice just for this recipe I usually cook it the same way as I do pasta. I bring water to a boil in a pot and add rice to it, then cook for 7-10 minutes and drain. Don’t worry if the rice is not completely soft, it will get there when you are cooking peppers.

Like I mentioned earlier, the traditional recipe is quite pared down on flavours but I like to add caramelised onions and chopped parsley to my filling. It makes a world of difference. 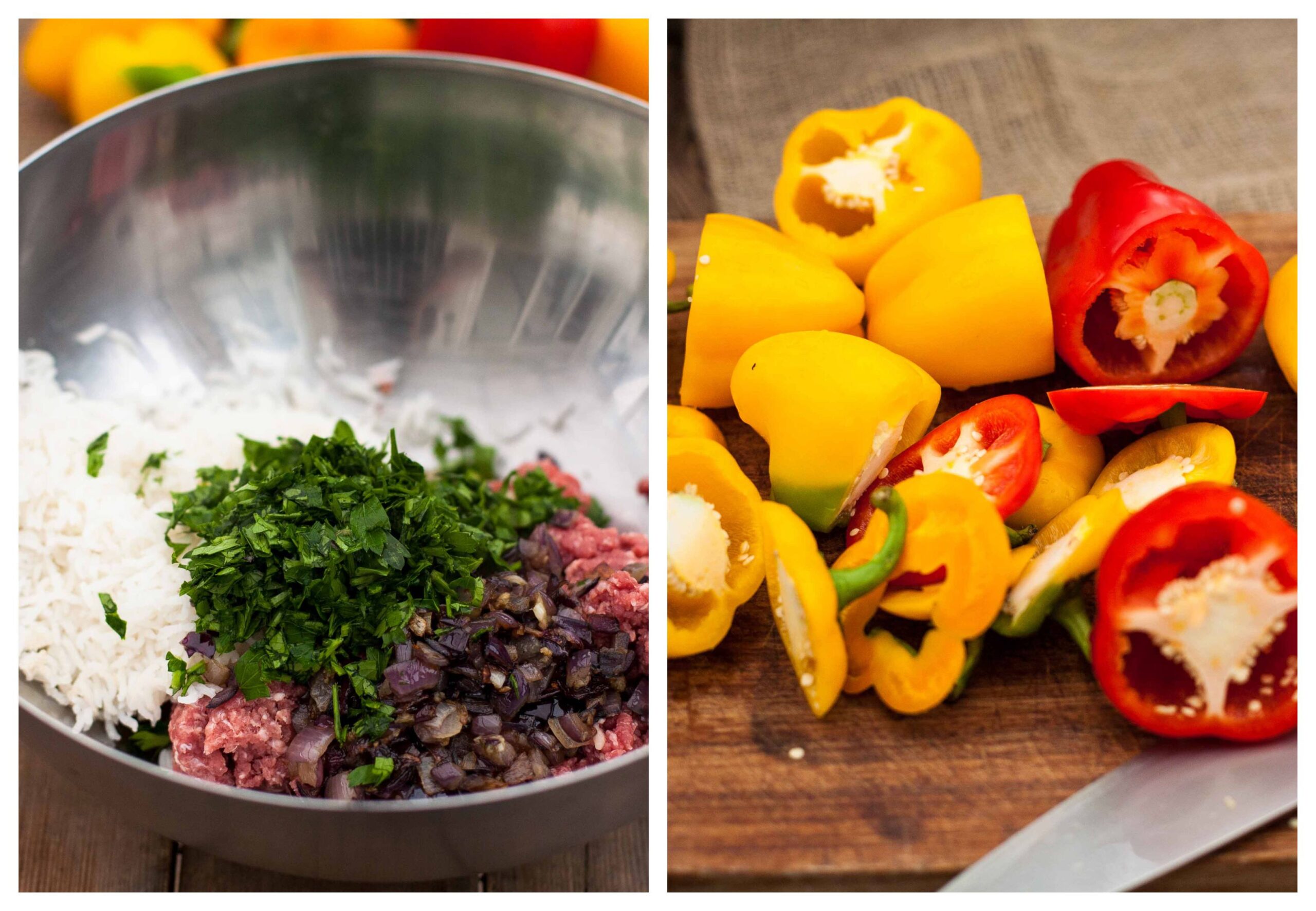 How to prepare bell peppers for stuffing

I like to use a variety of red, yellow and green bell peppers to fill as they all have a slightly different taste and a degree of sweetness. Wash the peppers, cut the tops off and remove cores with seeds and membranes by gently pulling and twisting them out of the peppers.

If you are using very large peppers, I recommend cutting them lengthwise, so they are not too deep. Then remove the core and stuff them like you see in the first photo.

Stuff bell peppers with the meat filling making sure not to pack too tightly, which would result in tougher, denser meat. If you have any leftover filling roll it into meatballs. We used to call them “hedgehogs” when I was little because rice starts to poke out when they cooked resembling the hedgehog quills.

Stand stuffed peppers up in a large casserole dish and put the meatballs (if you have any)on top. Choose a casserole dish where all the peppers can fit while standing up. Once again make sure there is a little space around them for the sauce.

Next make the sauce for stuffed peppers. 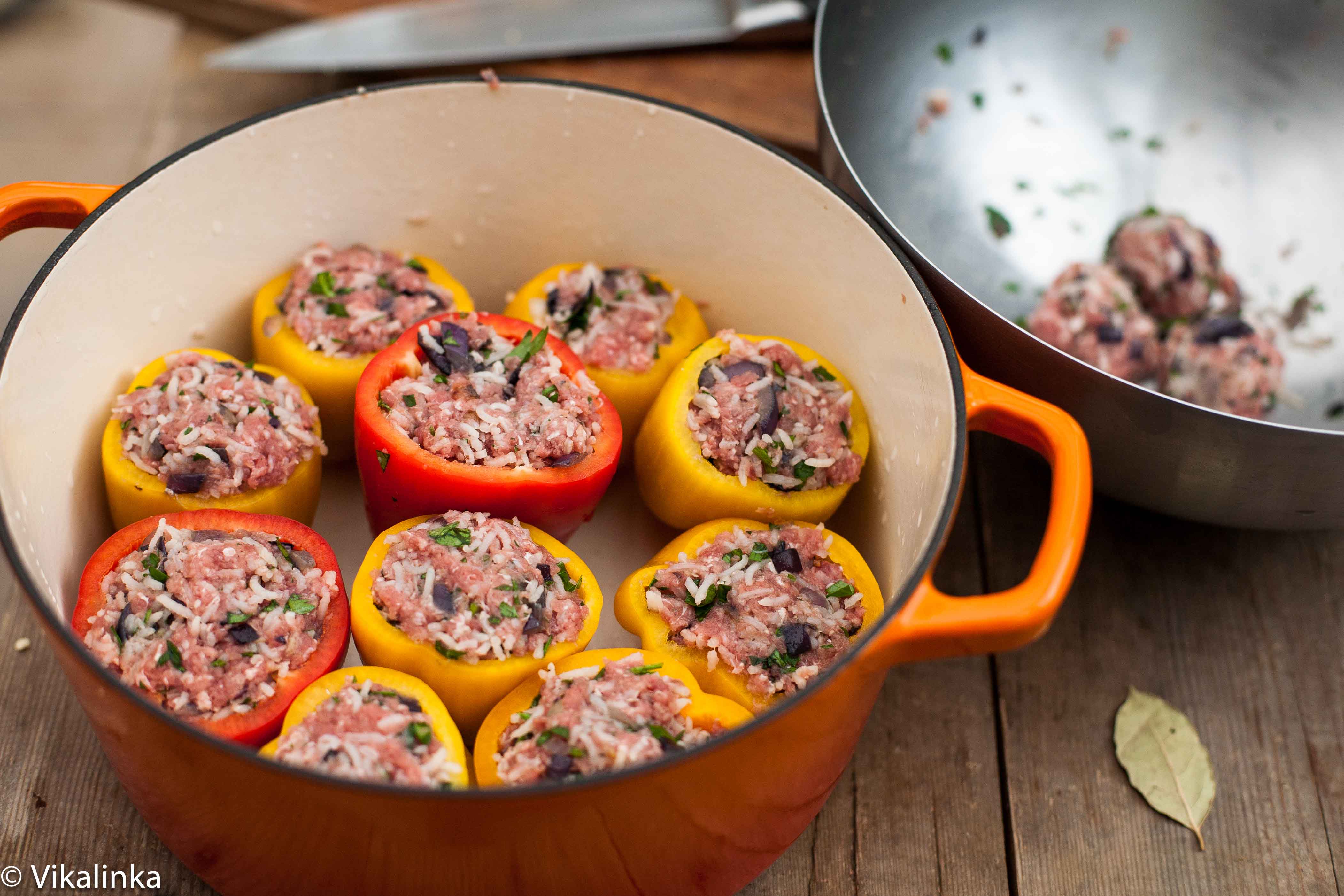 One of the best features of this dish is the sauce. After 40 minutes in the oven this tomato and sour cream based sauce becomes even more delicious through absorbing the flavours of the peppers and the meat.

People joke that Russians put sour cream in everything and we really do. Can you blame them?! Wouldn’t you if you hit the jackpot!

Make sauce by mixing full fat sour cream with crushed tomatoes with a touch of paprika and salt. Pour the sauce over the peppers and add a bay leaf for flavour. Cover with a lid and put in the preheated oven for 40-50 minutes until the peppers are soft.

If your sour cream separates a bit in the process of cooking, don’t worry it will still taste just as amazing. Serve your stuffed peppers with mashed potatoes or on their own. I am getting hungry all over again just thinking about them!

You can enjoy a low carb version by replacing the rice with cauliflower rice or grated zucchini.

Alternatively you can replace rice with other grains like millet, quinoa, bulgur, buckwheat or your favourite grain.

Recipe originally published in 10/2013. Updated with new text and photos and republished in 02/2020 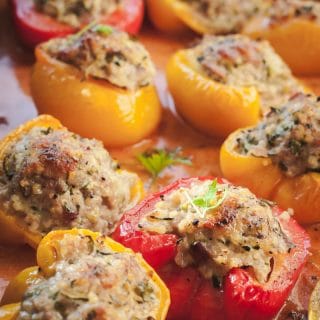