Hosting a crostini party is the easiest way to entertain! Toasted bread with a range of tasty toppings dripping with flavour are easy to make and always popular with a crowd. Here are my 4 favourite recipes!

Fans of crostini will adore our Bruschetta Recipe Trio!

I’ve long been following piece of advice passed on to me by a professor back in my university days. He said, “You have to celebrate things that are important to you!” A simple truth so easy to overlook.

That’s one reason why I always keep recipes like this one ready to go. There is just something festive about these tasty bites, which makes them perfect for a gathering with friends or for a private celebration of your latest success at work!

Best of all, they are incredibly simple to put together. There is precious little actual cooking here. It’s all about assembly and getting creative with toppings!

This post was actually inspired by little crostini from Italian restaurants I’ve been to over the years. Crostini are so often on the menu and are a favourite appetizer. Tasty and fun to eat, topped with all things imaginable!

Because I have so much fun eating them when out, I knew they were something I wanted to bring into my own kitchen. I’ve played around with a lot of topping ideas, but in this post I’m sharing the four I love the most!

If you are not familiar with crostini, they are small rounds of toasted bread topped with various delicious things. They are a traditional Italian snack and have a lot in common with bruschetta.

While there are a number of toppings you can expect to find with traditional crostini, there are not really any hard and fast rules you need to keep track of. This means you can let your imagination run wild when choosing toppings!

How To Make Them

Toast some bread with olive oil. You want a lovely crispiness to the pieces of toast with just a little bit of charring around the edges.

Survey your fridge, pantry and countertops and decide on the toppings. Here is what we rustled up.

I’ve found it to be important to think of complementary flavours when making crostini. The best spread has a balance of savoury, sweet and creamy.

Add the toppings to your crostini shortly before serving. You don’t want to lose the crispiness of the toasted baguette so best not to leave them for too long.

This is especially true of the tomato and basil crostini as the tomatoes will lose a lot of juice after they have been cut. Either top them immediately before serving or serve the topping separately from the toast.

I hope you will enjoy them as much as we did. These are some of my favourite ways to make crostini, but there are so many other great options out there. If you have any other ideas share the in the comments below! 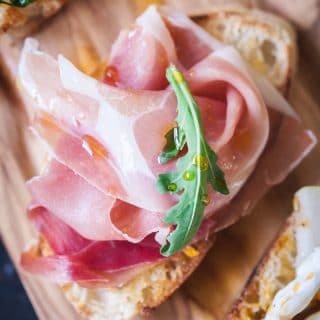 Crostini with prosciutto and arugula