Home » Recipes » Breakfast » Grains » How do I eat buckwheat? Let me count the ways…

If you are wondering how to eat buckwheat, read on! 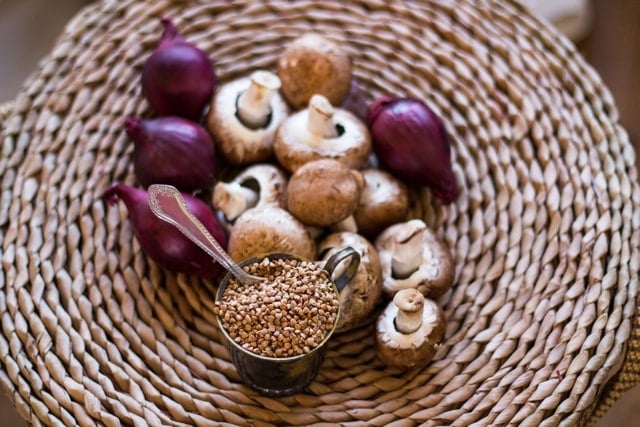 Quinoa, goji berries, flaxseed. What do they have in common? They are the buzzwords circulating in the foodie media/blogosphere, all claiming to be a “miracle food”.

Like many others I get weary and suspicious when the next “cure for all ills” emerges, being of the opinion that variety is key in any diet. That said, I believe buckwheat is something special, and that will soon flood first the health stores then the supermarkets and then pantries everywhere.

As we stand now buckwheat is still fairly unknown outside of Russia, where it’s been a staple for centuries, and a big part of my diet growing up.

The most common use of buckwheat in North America is in the flour form. It’s gaining popularity for it’s unique earthy taste and the fact that despite the name it is not related to wheat or any other grain and is gluten-free.

People want to incorporate more buckwheat into their diets for its health benefits-high amount of protein, fibre, potassium and over 80 minerals! However, I am not going to go into details as I am not a nutritionist but merely a buckwheat lover. You can research it yourself if you are interested!

How to use it in cooking

One of the greatest qualities of buckwheat is its versatility. The groats could be ground up and made into pancakes,  waffles , cakes, or even bread! You could enjoy a bowlful of  morning “kasha” (Russian for porridge) with a bit of milk.

For lunch toss it with some fresh veggies in a salad or sit down to a plate of savoury buckwheat with caramelised onions and sautéed mushrooms for dinner.

Reheat the leftovers in the morning, top it up with an egg and voila a new breakfast dish is born! The only two things you need to know are what type of buckwheat is suitable for these recipes and how to cook it.

When I first moved to North America 15 years ago the only place I could find buckwheat was a health food store but although I could recognise the familiar triangular shape of the groats, the colour was anaemic grey instead of rich brown I was used to.

I learned that buckwheat sold in Russia is pre-roasted, and it is this process that prevents the groats from turning into a mushy mess during cooking as well as provides that lusciously nutty flavour I’ve come to expect.

It seems that many stores have the pre-roasted variety of buckwheat groats, however, the best buckwheat comes from Russian stores so if you have one nearby check it out. It’s worth it! 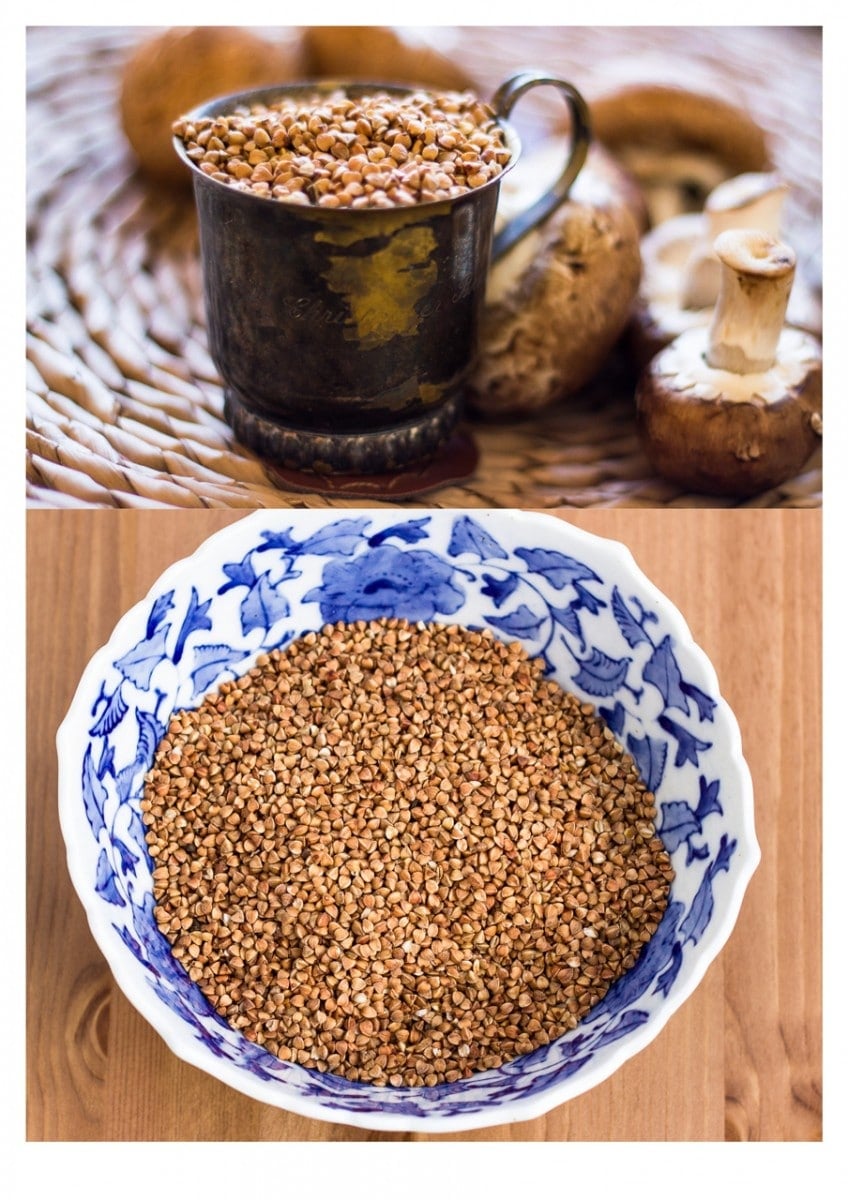 What I would like to share with you is the basic method of cooking buckwheat and one simple recipe which happens to be my family’s favourite way of eating it. Have I mentioned that my kids are crazy about buckwheat? 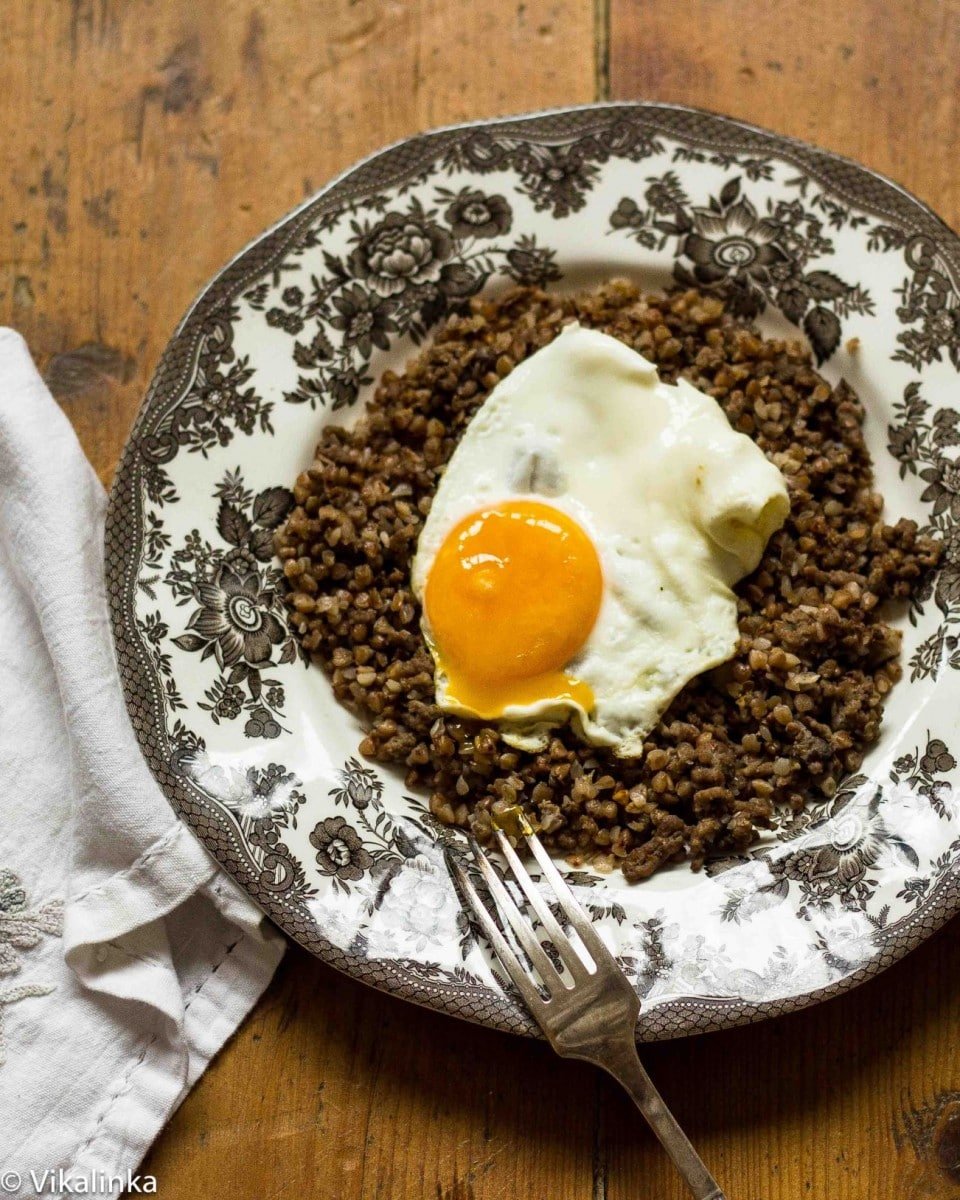 This meal could be enjoyed as a main course or as a side dish to any type of meat or fish.  What you see here is leftovers that were served a couple of days later for breakfast.

Fry your eggs in a frying pan and top each portion with an egg. By all accounts-Breakfast of Champions. 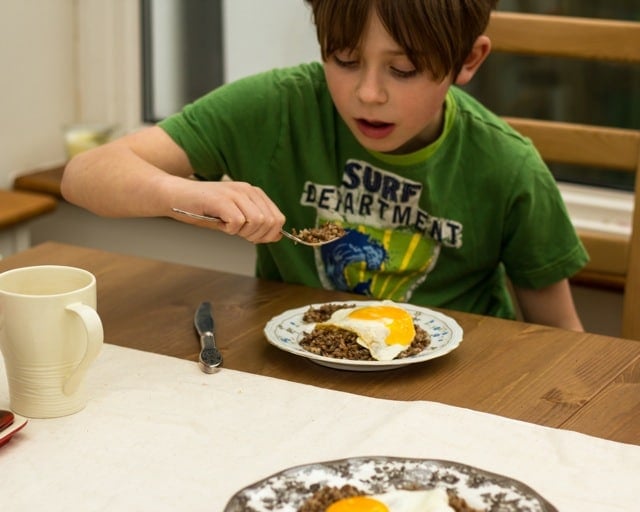 Note: I use water to cook buckwheat when I want it to be versatile-sweet or savoury.

If you are preparing buckwheat for dinner in a savoury dish I would suggest using broth instead of water- a quick and simple way to infuse your dish with much flavour.