If you love this dressing, try it with Green Goddess Pasta Salad!

Have I ever bragged about my amazing potato salad? Chances are you’ve heard about it before if you’ve been following me from the beginning.

I’ve been making various versions of this potato salad for years. It is quickly becoming a salad of choice for anyone I’ve ever cooked it for.

I often bring it to barbecues as it goes ideally with grilled meat. Over time it became one of the most requested items. This version takes things adds fresh Green Goddess dressing to chunky ingredients with just the right amount of herbs. So, so good!

There are as many potato salad recipes as there are home cooks. This one finds its roots in what I ate growing up, the famous Salad Olivier.

It’s a salad made with potatoes, eggs, pickles, and chicken with a mayonnaise-based sauce. It sounds simple, but I promise you that it’s fantastic, so satisfying to eat!

It was so wildly popular in the restaurant where it was invented that they could never take it off the menu. Many other chefs tried to duplicate it without success as chef Olivier never revealed his secrets. He took the dressing recipe to his grave while the salad lived on.

The modern day recipe is not exactly the same as the original and my version will take you even further from the widely accepted one.

Traditionally it’s dressed with mayonnaise but not the sort you get in the average supermarket. Russian mayonnaise tastes different, and by different I mean better. It’s much closer to the traditional recipe than the Hellmann’s version.

Today I am putting a little twist on it by sprucing it up with gorgeous Green Goddess dressing. It respects the original while adding a fresh twist.

This version is a deconstructed Salad Olivier as all the ingredients are usually cut into a small dice and smothered in dressing. I opted for larger pieces and used my dressing sparingly. You are welcome to mix it in as you wish.

I seriously never believed it was possible to improve on Russian potato salad until now. I have this fantastic dressing to thank for it!

This Green Goddess dressing is a flavour jackpot and it goes with everything. Try putting it on your regular ham and cheese sandwich and see what happens!

What makes it so special? Um…just loads and loads of herbs blended with some mayo and creme fraiche or sour cream….and a handful of other ingredients. Delicious, fresh and incredibly versatile!

To make this this egg and potato salad a bit leaner, I chose low fat sour cream. It still tastes amazing but doesn’t have all the calories! 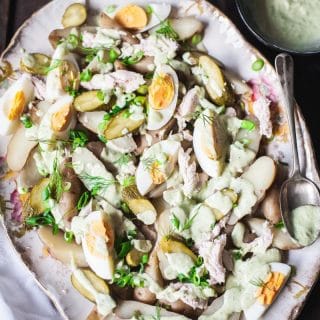 For the Green Goddess Dressing

Leftover Green Goddess Dressing can be stored in an airtight container in the refrigerator for later use.